Getting too close to your pets 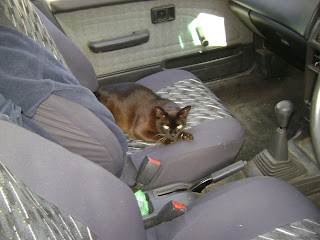 This is Zena, seal Burmese and a bit of a lounge lizard though she does attempt to be a real Burmese sometimes such as when there is a car to ride in.

She also does have the basic belief that she is a human occupying a feline body (as many burmese do). That means a feed of chilli washed down with a beer is her sort of meal, and onion dip on a potato crisp is good too.

The sharing has gone a little far though

I nearly always take a glass of water to bed with me so when I wake up at 2 am thirsty the water is within reach. Which worked for me... until Zena was discovered drinking from it. I do wonder how long that habit has been going on - did she always have a quick lap while I was in the bathroom I wonder...

I'm now taking a sipper bottle to bed.
Posted by wino at 2:08 PM

I recently came accross your blog and have been reading along. I thought I would leave my first comment. I dont know what to say except that I have enjoyed reading. Nice blog. I will keep visiting this blog very often.

I used to take a glass of milk to bed with me - until I discovered one of my cats delicately dipping her paw in and then licking the milk off her paw!