Working harder in the recession?

It's only Wednesday morning but it has been the week of unusual phone calls. In amongst the usual HRV (no, go away) and local paper subscription (no, as you won't deliver it - you give it to the rural postie and I don't want yesterdays news) both who manage to get in a call about once a fortnight it seems.

On Monday first up was the people who sold us a generator three years ago asking if we were still happy with it (which we are). I guess the plan was to upsell us if it was proving inadequate for the task. The woman and I had a pleasant chat about power cuts and power surges and those things that plague people who live in districts with slack lines companies.

A little after that there was the people we got a kitchen quote for in April last year asking if we were going to go ahead with it! That would have been an "I guess not" to me but I suppose once in a blue moon someone may say "oh yes I was meaning to get back to you on that..."

Assuming we weren't going to go ahead with it would have been even more reasonable since we actually had this place on our shortlist and tried to negotiate a couple of things. When they wouldn't do a deal we told them at the time that we wouldn't be dealing with them and why (the fact that they wanted full payment before they started making the kitchen was our major sticking point).

Then yesterday a local real estate salesperson rang to ask if we would be interested in purchasing the local lifestyle blot on the landscape if it should come up for sale as he believes it may do so soon. (ohhh interesting gossip!). Said he would mail the details. (am guessing that we know more about the actual physical attributes of the property than he does but will wait and see if there is more disclosure of the things we don't know). Our interest would depend on the price (as most things do of course).

That was followed by an enquiry about the poisoning programme on the DOC land and whether we were happy with it. Which is interesting as I didn't know if it actually matters to them or whether they are paying lip service to local consultation. We get on fine with our local DOC guys and they are using some poison that isn't transmitted through the food chain rather than 1080 and the possum population appears to have decreased so I can't think of any reason to be unhappy.

Wondering who will ring me today...
Posted by wino at 8:18 AM No comments:

Years ago we discovered a little cafe not too far from home (relatively speaking) that did a reasonable Sunday lunch. So any Sunday (and sometimes Saturday) that we got bored or needed a reason to go somewhere we took to heading there. And while reasonably infrequent (no one would have called us regulars) we were there often enough to figure we knew the place. This is a little cafe, of the type doing pies, sandwiches and the odd fry up on demand, not a resturant.

I don't know that the ownership has changed recently - the staff have but staff come and go anyway - or whether it is just with me that it has gone bad, but I'm not having fun in the place in recent times.

The first was a long black coffee that showed up as a flat white complete with a debate about what I had ordered. I'm allergic to cows milk - the words flat white, latte, moccachino, banana milkshake, or any other milk containing beverage just don't come naturally to me. I know I said long black. Anyway they got me a long black and my sense of rightness in the world was restored.

The second was the day husband ordered a big breakfast and I ordered a panini toasted. His bacon eggs hashbrowns sausages and tomatoes had been in front of him five minutes when I went and asked how my panini was. 'Yes yes it's coming' the cashier said, just avoiding a roll of her eyes at my impatience. Ten minutes later it arrived, and I am fairly convinced that the poor panini had been in the sandwich press for 20 minutes. It was burnt black on the outside and was solid on the inside. Why they put it on a plate and put a salad beside it was beyond me. It wasn't edible obviously. A passing table clearer noted my disgruntled levering open of the bread and offered to get me another one and when I declined on the grounds that I wasn't willing to wait any longer I was given a refund. So they were forgiven that time.

Today we went again. And I ordered seafood chowder. Which took 30 minutes to arrive. Husband again got a plate of cooked stuff put in front of him. People who came in ten minutes after me got plates of fish and chips while I waited. They were into the minutes grace before I stood up and asked for my money back when they delivered the meal. It was actually the best seafood chowder I've had in a long time but that doesn't negate the fact that it should have taken no more than a few minutes to prepare and the sunday lunch experience isn't nearly as much fun when you first spend time watching your lunch companion eat, and then they get to watch you eat.

I think we will be finding another Sunday lunch place.
Posted by wino at 2:50 PM No comments:

When I was fairly young we lived in a huge old villa in Taumarunui for a while.

Coming out of a near new bungalow in Nelson my mother found the big freezing old heap of a house a fair trial I believe (at the time I was too young realise that, but her comments in later years tell the story and suggest that she came very close to not coping at all during those years).

The house had a coal range. No doubt a trial in itself to operate but responsible for turning the huge kitchen into a warm and cheerful place on bleak winter afternoons when the fog settled early (and tasted of coal smoke). There was milo warming on top of that range and sometimes biscuits baked in the oven too.

Tied in with the memory of the coal range was the memory of the drying rack over it, working on a pulley system that lowered it to reachable level for hanging the clothes on it which were then hoisted back up to just under the ceiling to dry in the heat but well out of the way.

Forty years on we have our own big old villa. In a climate slightly more temperate than Taumarunui and a little smaller and a little better insulated. No coal range though (and I was tempted by Wagener stoves and Agas and the like when we did the kitchen, but in the end gas seemed a bit quicker and less tempermental). This week though we got the drying rack. 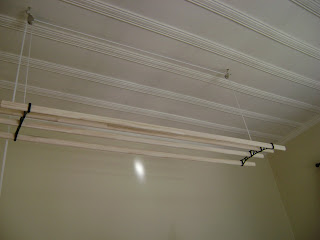 Clothes hung over it at 6pm are dry the next morning. Who needs a clothes dryer. I do feel remarkably satisfied with this, for no good reason. I guess it is nostalgia as much as anything else.

As an aside the villa in Taumarunui has been in recent years restored and modernised to the showpiece property it must have been when originally built. And the house in Nelson my mother missed so much has been a rental for quite a while and the lack of TLC is showing.