I could never be a vegetarian. I could go without meat no doubt but the affection I feel for leather would make any dietary restrictions completely hypocritical.

It comes from being a horsemad little girl I think. The smell of glycerine saddle soap is still divine as far as I am concerned and carries subconscious memories of Saturday nights before Pony Club with horse gear strewn round the dining room and industrious labour with saddle soap and silvo to be neat and tidy for gear check the next day.

These days I mostly use a synthetic saddle so the saddle soap doesn't get as much use on equine related leather, but I would rather clean my leather handbag and wallet than do housework (and sometimes do).

Which leads to the large overnight bag. Mother in law had a large, wheeled, soft sided overnight type bag when she came to stay a year or two ago. Husband idly admired it so he got one for his birthday. He used it once for a business trip across the Tasman, I used it every time I went away for work - a reasonably regular event. The last time I unpacked it in a motel room I found I had literally worn it out - there was a patch on the base where you could see daylight. Now seriously it got some regular use but I hadn't used it THAT much - they don't make luggage like they used to you know.

Could have gone to the Red Shed and got another Made in China bag I suppose. Instead I had a wee look at the Flybuys statement. As it happened there were enough points for a new bag. And really what use are loyalty points unless they get you something you sort of want but can't really think of a good enough reason for spending real money on it. 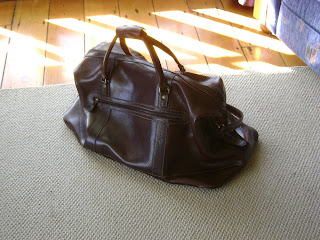 So it arrived. Chocolate leather. More stuff to saddle soap. Isn't it pretty?
Posted by wino at 4:02 PM 2 comments:

Minis at the beach 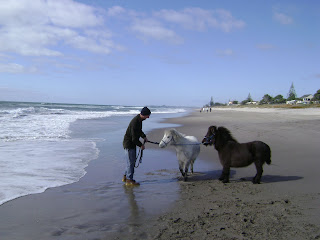 It was a toss up - take Ears the old girl for a ride and Tee the yearling for a walk or put three woolly minis in the float and take them for a walk. The minis won, the big guys can go next time.

Topaz the baby didn't get in the piccie as she was firmly attached to my leg like a nervous dog for most of the time. But she was very good for a baby who had never left home before, let alone seen all that wet moving stuff and scary horse eating birds that were in the wet moving stuff, and so many dogs. Little black Ebony had obviously never been to the beach before either - she took a bit of coaxing to keep moving when she first put her feet on the sand and there was no way she was getting near the water.
Posted by wino at 5:37 PM 2 comments:

ATILDA told such Dreadful Lies,
It made one Gasp and Stretch one's Eyes;
Her Aunt, who, from her Earliest Youth,
Had kept a Strict Regard for Truth,
Attempted to Believe Matilda:
The effort very nearly killed her,
And would have done so, had not She
Discovered this Infirmity.
For once, towards the Close of Day,
Matilda, growing tired of play,
And finding she was left alone,
Went tiptoe to the Telephone
And summoned the Immediate Aid
Of London's Noble Fire-Brigade.
Within an hour the Gallant Band
Were pouring in on every hand,
From Putney, Hackney Downs, and Bow.
With Courage high and Hearts a-glow,
They galloped, roaring through the Town,
'Matilda's House is Burning Down!'
Inspired by British Cheers and Loud
Proceeding from the Frenzied Crowd,
They ran their ladders through a score
Of windows on the Ball Room Floor;
And took Peculiar Pains to Souse
The Pictures up and down the House,
Until Matilda's Aunt succeeded
In showing them they were not needed;
And even then she had to pay
To get the Men to go away!
It happened that a few Weeks later
Her Aunt was off to the Theatre
To see that Interesting Play
The Second Mrs. Tanqueray.
She had refused to take her Niece
To hear this Entertaining Piece:
A Deprivation Just and Wise
To Punish her for Telling Lies.
That Night a Fire did break out--
You should have heard Matilda Shout!
You should have heard her Scream and Bawl,
And throw the window up and call
To People passing in the Street--
(The rapidly increasing Heat
Encouraging her to obtain
Their confidence) -- but all in vain!
For every time she shouted 'Fire!'
They only answered 'Little Liar!'
And therefore when her Aunt returned,
Matilda, and the House, were Burned.