Creative solutions from the council

Neighbour got a letter suggesting they might like to fix the ditch at the end of the driveway. I don't think that was in their plans at any point...

Interesting missive - vastly different from verbal exchanges. They seem to totally ignore the fact that they have diverted stormwater onto our land (do they think that we will ignore it too?)

Still about twelve people or organisations on my list of who to contact about this. Time to fire off another three or four I think.
Posted by wino at 9:10 AM 1 comment:

Labels: the ditch at the end of the driveway

The dear old biddy is really a naughty old girl 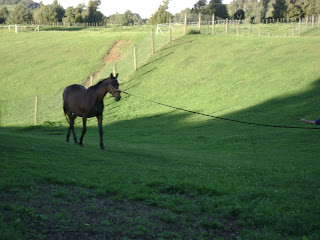 Ears is on a slow fitness programme, as is befitting a 21 year old aristoctratic old lady, which includes two days riding a week and two days lunging. How she behaves when lunging on any given day is entirely up to her. Some days she has the lunge line clipped on and sets off at a trot which she continues through commands of walk, stand (or canter or gallop) until you haul her in or she decides to stop. Other days she does exactly what she is told when she is told to do it. Sometimes we put poles on the ground or a small jump out to lunge her over, sometimes she says "Oh what fun". Sometimes she says "Oh my god what on earth is that horse eating thing on the ground" and leaps sideways before whatever it is gets her. Sometimes when I laugh she decides that she might just behave herself, sometimes not.

Riding sessions are a little more disciplined - she really knows better than to misbehave under saddle, though some days the moaning she manages to do while trotting would convince you that she is dying if you didn't know better.

She also nearly got me with the pink mounting block.

Not being as agile as I used to be I generally climb on board using some method of elevating myself closer to horse height. For quite a while it was either the side of the yards or an upturned water trough (or sometimes the side of a concrete water trough but really that was asking to go swimming) Then recently I saw and purchased a rather vivid pink mounting block, three heavy duty plastic steps, easy to pull round and being such a bright colour difficult to lose in long grass. I was very pleased with it when I positioned Ears alongside and climbed the steps to find that I was at a great height for ease of sliding into the saddle. The old girl of course had a plan. At the moment that I had a leg half over her she looked round, pretended she had just realised that the pink thing beside her was close enough to attack her fetlocks, and leapt sideways. I didn't fall off - but it wasn't pretty. She probably laughed, I did when I had both feet in stirrups and felt relatively secure again.

Anyway tonight she had a lunging session - and was a good girl. So she was put back out on a new bit of grass on the other side of the hot wire from Roxy and Tee for half an hour before they were allowed in with her. They were somewhat agog that she had all that nice green stuff and they didn't have any and stood as close as possible to the wire looking on wistfully. Now a dear old biddy who had in truth been a little short on food all day would put her head down and start eating wouldn't she? Not Ears, she spent twenty minutes cantering up and down, kicking up her heels and totally showing off to the other two that she had managed to get the best deal.
Posted by wino at 11:16 PM No comments:

I came late to MP3 players - mostly because I had a good CD stacker in my car and didn't see any need to have more than that - until it broke and the repairman shrugged and said "Everyone has iPods now, not worth fixing."

So iPods it was. We briefly considered the other MP3 options but got seduced by the brand in the end. I still covet the iTouch a little but we got a couple of Nanos, one for husband and one for me. He's pleased with his - he can listen to AC/DC while he harrows.

How can they fit thousands of songs in something the size of a credit card?

I think this is a good thing - I am equipped with a playlist of 120 odd music CDs, a few more downloaded from iTunes Store and such gems as Italian for Rude Americans (not the real name obviously - so far I have maybe ten words of Italian, twelve if you include Lamborgini and Ferrari). So I must be ready for the longest wait in the doctors ever, and about three days non stop driving.

The thing is managing it all seems to take up a lot of computer space and time (and the old laptop is struggling under the load - may need to get a new one... hmmm)

And I must be getting really old, but I used to be really pleased if my car played tapes. Remember those things that stretched and broke and wrapped themselves round the player heads needing major surgery to untangle.

Who would have thought then that I can now tuck my entire music collection inside my bra.
Posted by wino at 10:39 PM 3 comments:

I fear my compulsive obsessive tendencies are showing

I am still working on that ditch at the end of the driveway.

And as I said to the Council and Inroads guys yesterday I am not going to give up on this so they really might as well save themselves the timewasting they will otherwise be involved in and fix it now.

We had a meeting - a remarkably amicable one actually - on the side of the ditch yesterday morning. It was raining which was convenient as it was relatively easy to see that the ditch wasn't actually dealing with the stormwater that well.

Some remarkable utterances were made including:
"we have decided in cases like this in future we should notify affected people before doing the work" Great start - and nice admission that it wasn't a very nice thing to do.
"It may have fixed 10% of your neighbours stormwater problem" this was said in a hopeful tone of voice because really the neighbours stormwater problem is not even slightly improved.
"The original job wasn't very good" Agreed!
"we try not to do work at the ratepayers expense that isn't necessary" (looks like you screwed up in this case)

It also emerged that the soil dumped on the verge and the secondary ditch was only supposed to be done with the permission of the owner of that land. We know that wasn't given.

It strikes me as something Fair Go would love. They came and did some work they shouldn't have done as it wasn't their problem.. They did a terrible job. Then they sent us letters telling us they expected us to pay to fix it and warning that if we didn't get a permit to do it and do it to their specifications we would be in trouble.

Anyway they went off to contemplate solutions. I believe they may have a letter from Rodney Hide about the matter either now or very shortly (as his office wrote to us to say they were looking into it) so that should hopefully keep them focussed on finding an answer.
Posted by wino at 2:47 PM No comments:

Labels: the ditch at the end of the driveway
Newer Posts Older Posts Home
Subscribe to: Posts (Atom)