We moved in the weekend. And it didn't go according to plan.

First the new house is filthy. The departing owners did a perfunctory clean so the floors looked bearable but the cupboards were dirty, the oven is clogged with burnt left overs (you can't see them though as the door is covered with baked on grease and as the oven doesn't seem to bake anyway it is all a bit immaterial), the windows haven't seen any form of cleaning for years by the look of it, the windowsills are all growing things, and shower is a bit dubious looking.

Then they left a bit of stuff behind - a pool table sitting slap in the middle of a garage. They have that listed on trademe at a price a bit on the excessive side, about 30 bales of mouldy hay in the other garage (apparently sold - I wonder if it was honestly advertised and whether the buyer will actually take it, I wouldn't feed it to stock and 30 bales is a lot to stick on the garden) and a dead car (also apparently sold). Not to mention some sheep and a horse. All these things they feel we should just take care of until they get round to them. There has to be some give and take we were told. Believe me there is some give and take, we gave them a heap of money and they can take their rubbish away!

Apart from that I have a stomach bug which really adds to my pleasure in life right now. And good old Telecom have gone back to the you can't have broadband story. There was broadband installed here a month ago, but now apparently it won't work. It so obviously won't work that they won't even put through a connection order. Funny since if you go into the telecom website and put the phone number in it tells you broadband is available at this location. Spent an hour and a half on the phone to two support staff on Monday night trying to sort it out. The first one was trying to be helpful and put me onto his supervisor to see if he could help. He could have but he chose not to. (why is it when I ring these places I always get the stubborn and intellectually challenged individual, either I have very bad luck or maybe it is that most of them are idiots and I haven't a hope of getting one with half a braincell as those people have resigned in disgust) We had a yelling match in the end as I stated repeatedly "there used to be broadband here" and he replied repeatedly "well it won't work it is too far from the exchange" Grrrr. In the end I said I was bored and going to hang up. He asked if I had had a problem with the first person I had spoken to and did I want to make a complaint! (I replied that the first person had been fine, it was just him I found obnoxious). Rang back the next morning and got a human being with more than two braincells and we now have the technician booked to come out. So maybe that will work, eventually.

Apart from that there are plans being sketched on stray bits of paper everywhere. Husband seems to think that we need two more bathrooms (a total of three) on the assumption that doing two at once will be almost as cheap as one... he knocked a hole in a wall about three hours after we took possession. I must admit it is a vast improvement even if it looks a bit scruffy right now.
Posted by wino at 11:53 AM 2 comments: 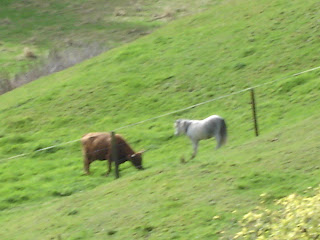 Not the best of pictures but this is Kintala Aurora meeting Calypso.

She's a G1 Dexter in calf to a full dexter bull. Very tame little cow, you can put a halter on her and drag her round, she can be milked though we probably won't bother (though I guess it would be quite handy to hop out to the paddock and grab a cupful when you run out).
Posted by wino at 9:33 AM No comments:

Are we up to three yet

So there is a car with a dent and a cattlebeast owner who now reckons he has no public liability cover... gave the insurance company his address and left them to sort him out. Find it extremely negligent if he doesn't have cover but completely his problem.

The idiots that killed my car some months ago and have been ranting and raving ever since sent an account for the whole repair yesterday with a note that it was overdue and legal action would be taken . Sent them back a copy of the last letter with a note that they obviously hadn't received this and I looked forward to seeing them in court with the counterclaim.

Then the trailer rolled down the hill - straight through the gate and missed the shed by inches. No damage to the trailer which is an ex ministry of works model of very solid proportions but the wooden gate no longer appears suitable for the purpose it was intended...

8 sleeps until we become the owner of the neighbours. They are moving out this weekend they say so we will probably move ourselves in the weekend after.

We moved moved the cows and the hay over there over the last week. I am totally bored with lugging hay round.
Posted by wino at 9:23 AM No comments:

Black cow on a dark night

I was driving home yesterday - quite late as I had been in Hamilton. Was coming down our road, past the roadworks (where they are apparently turning it into a four lane highway judging from the trees they have decimated and the fences they have moved), and almost home when I spotted two bright pinpoints of light on the grass verge at cow eye height.

A bit closer and it came up in the headlights as a black bovine of some description. At that very moment its mate ran into my car.

Both cattle cleared off at some speed and I got out, couldn't see a thing in the direction they were heading and assessed the car damage - nice dent in the front left corner. Cruised up to the nearest house to tell them their cattle were on the road (with one possibly injured) but the gate was locked so I carried on home.

After some ringing round the district managed to locate the owners phone number and left a message on their answerphone. The wife rang back half an hour later, she was home alone with two small children and would ring a neighbour to sort out the wandering stock and send her husband down to see me at some point in the weekend. Feeling that we should perhaps help as we were doing little else husband and I got in the 4WD (the one with the big bullbars) and headed back down the road to help round the escapees up. We found one miscreant on the side of the road, a little black bull with blood and a scrape on his leg but otherwise looking unharmed and walked him back up the road to the owners yards where we left him. Neighbour got down to fixing the break in the fence where they escaped and we scouted the rest of the road for the other beast before concluding it had either gone back where it came from or gone bush.

Home again to discover the cat had had an argument with something - possibly a possum - and has rather a large bite mark on his leg.

Sometimes you have to wonder if living in a little apartment somewhere wouldn't be less trouble.
Posted by wino at 1:07 PM No comments: