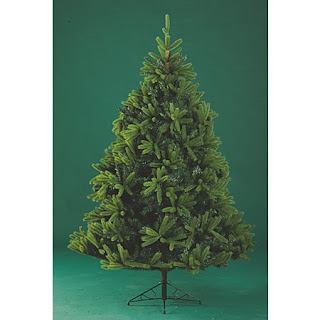 Our Christmas tree in no way resembles the photo. For starters it is a real tree.

And when you go out with the chainsaw and take out a tree that seems fairly small compared to the half grown pines you lose your sense of perspective and have to cut a metre off the tree so it fits under the 3.6 metre stud. It is definitely the largest tree ever, though not the most densely branched one. Those carefully grown Christmas trees they sell at exorbitant prices are definitely prettier than our tree.

Too late and never mind - it is here now. I hope the angel on the top of the tree doesn't get vertigo.

For the last couple of years I have also been left pondering why, when there is an endless choice of Christmas decorations now I can't find a set of tree lights that I like as much as the two sets we currently have (one of which is over 20 years old). I am further spurred on to replace them as electrician husband mutters that they aren't considered safe these days being plugged straight into 240 volts. I have visions of visiting toddlers reaching out and being fried on the 20 year old 240 volt lights. I tried again this year and found a set I did quite like, took them home and plugged them in to find only half the string worked. When I tried to replace them they didn't have any left so had to refund me. I guess the old ones are here for another year. Another case of too late that's the way it is now and I have made a mental note to unplug the lights if any toddlers are visiting.

So here I sit - glass in hand, critiquing the Christmas Tree and contemplating the year that was.

Merry Christmas to you. 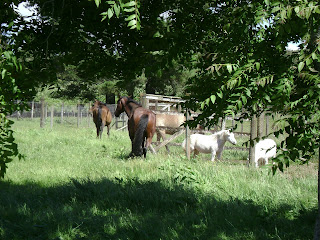 I know, the fatty girls don't really need that much grass - but someone has to eat it.
Posted by wino at 5:45 PM No comments:

Just for a change all went to plan 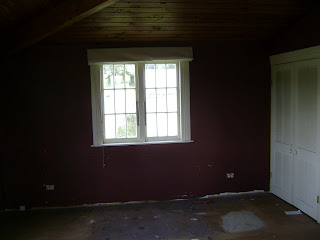 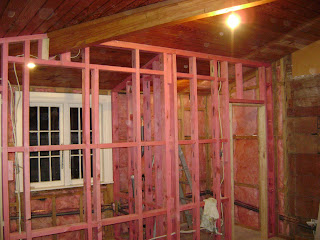 And this - bar the carpet which is going down on Tuesday next week - is what it looks like finished. Interestingly the gibstopper said he gibstopped this entire house in the late 1990s when he was an apprentice - I thought on the whole our walls were pretty good, that might be why. 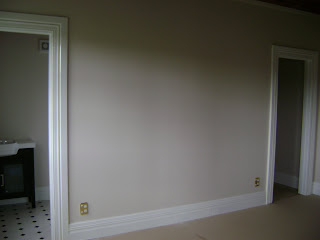 As you can see the ensuite is too small to photograph properly. 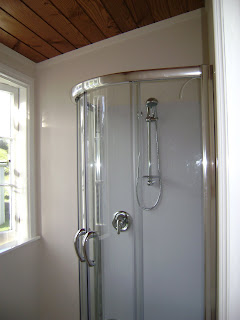 I am impressed how well this came together. Tradesmen arrived when agreed and didn't have brainstorms about doing it differently or trouble measuring things, they came and went in a synchronised fashion so no one was waiting for anyone else.

There are minor glitches like the place that can supply the door handles we want refusing to return calls, and the doors needing to be taken off, taken outside and painted, but nothing at all major.

I don't think we even went over budget...

My last bit of work for the year just came out the other side of the audit with a clean bill of health so now I just have to make the Christmas Cake, do some other assorted Christmas baking and finish two christmas presents.
Posted by wino at 5:19 PM 2 comments:

I blame the school dental service for the state of my teeth. They drilled and filled and generally made a mess of them for years and now they are disintegrating, irreparable, past root canals and rebuilding thanks to bad fillings.

Some more had to leave on Monday. You have to love the drugs these dentists have, I don't remember any of it past the time he said he was injecting the stuff into my arm, until he handed husband an envelope of instructions and said I needed to take it easy for a couple of days.

48 hours passed so I figured the taking it easy bit was over and it was alright to go pick up hay last night. Not sure the dentist will approve but someone had to pick it up, it can't just sit there forever.

What a mission! The contractor hadn't had the small baler out so far this year and he did note that some of the first bales were solid. Solid! I can hoist 25kg bag of horsefeed with a minor effort - some of the first 80 bales we picked up I could not move off the ground. They were perfectly dry, as the one that broke open showed, just incredibly densely packed. We sack barrowed them to the end of the hayshed, almost winched them onto the growing stack, swore, had an argument and contemplated shooting all hay eating animals and leaving the darn hay where it sat.

Thankfully it was only the first paddock full, and we started with them so after that things improved.

This morning my mouth is fine but my back is complaining a little and the hay scratches up my arms and legs are irritating.

More to pick up tonight and if the weather holds more on Sunday.
Posted by wino at 8:39 AM 3 comments: