Cool things to do with your afternoon 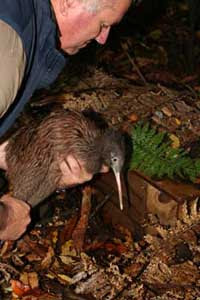 There was a knock on the door about lunchtime and it was our local kiwi trust worker Dave, bearing aerials and miscellaneous gear. "Lost a kiwi?" I asked

"Found her"he said, "she's just up the road in the bush, she can't stay in there, too many dogs round, want to come and help get her out?"

Well the only answer for that is "Yes please"

He told me about this young lady as we walked up the road, she was released in May and has been on the wander ever since. There are two perfectly nice batchelors in the reserve but she doesn't want either of them, so wanders around causing domestic disharmony with the married couple kiwis and when the wives square up to her she wanders off again. This is the second time she's headed out of the reserve area, they spent all yesterday looking for her with the kiwi finder dog without being able to pin her down but this morning he got a fix on her transmitter and now only needed to catch her.

So we bush bashed round behind her so she wouldn't run off again and found her under a huge stump tucked up comfortably, despite hopes that she might have had a boyfriend in there she was alone. I got to guard the second exit from her hideyhole while Dave hauled her out. Then he let me hold her so I got up close and personal with a kiwi.

Cuddle over we packed her into a box and bashed our way out again and I left Dave to take her back to where she belongs. Maybe she'll decide to stay there sometime soon.
Posted by wino at 2:54 PM 1 comment: