As many New Zealand rural dwellers do we have a rainwater tank water supply. So the rainwater off the various roofs round the place collects in a rather large rather disreputable looking concrete water tank. And mostly that works just fine. Except back at the end of January when it didn't rain for a while and we ran out. Not too big an issue as it conveniently rained six hours later but irritating none the less.

So at Fieldays we walked up and put the credit card down and ordered a new plastic tank (at a fairly good price too) to add to the water storage facilities.

About two months later they delivered it, and we rolled it round a bit and tied it to the fence so it didn't blow away and rang a couple of plumber/drainlayers about getting it connected. One never showed up and the other showed up about a week after he said he would and said it was no big deal and as soon as we put the tank down on the proscribed base in the selected place he would show up and plumb it up. So we did that and rang him back - no problem he said, he'd be out Monday the next week.

That was a couple of weeks ago. He's failed to return calls or contact us at all since. He can't have gone to the wrong place as he's been here before... we left a phone number a couple of times so doubt he lost that. He's even put leaflets out in mailboxes in the last week promising prompt reliable service. Maybe he doesn't like us. Not sure why, our cheques are as good as anyone else's (and better than some no doubt)

So yesterday we went and discussed the whole thing with the plumbing and irrigation experts in town and bought a whole heap of parts. They agreed with the plumber about how it should work so it seemed relatively straight forward.

Except the plan to fill the new tank from the old tank and run them both in tandem doesn't work. And when we applied ourselves and our memories of high school science lessons to it we could see that it wouldn't work the way they said it would.

We think we have the solution - but now it needs more parts.
Posted by wino at 8:12 PM No comments: 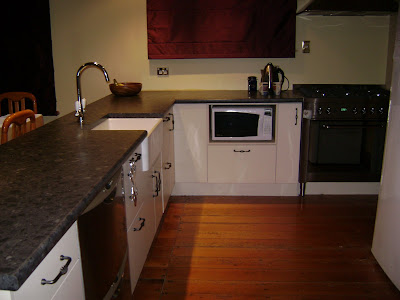 Thought it was about time I showed you how the kitchen came out. To the right - past the stove - is a walk in pantry that fills what was previously a blank piece of hallway. Behind me is the old pantry which has been refitted to take the plates and serving dishes and things. It is the most basic kitchen we have ever done but my favourite (so far)
Posted by wino at 7:56 PM No comments: