Went up north for a while

four days to be precise - for work.

Going up north for a while used to be what pregnant girls did in the 60s.

Get Fudged - sold fudge of course

Living on the Hedge - selling hedging and shelter belt plants

Well I liked them (guess ya had to be there)
Posted by wino at 10:41 AM No comments:

the calves stopped bellowing so we weaned the foals on Friday.

They have been fairly good on the whole, a little yelling from both mothers and children but not excessive. A small attempt to dig their way out of the deerfenced paddock when they decided it was too big to go over and didn't seem to have enough gap to squeeze through but otherwise no problems.
Posted by wino at 10:37 AM No comments:

they just keep getting bigger 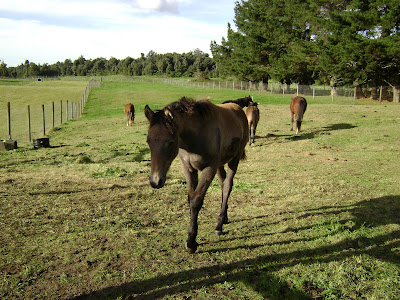 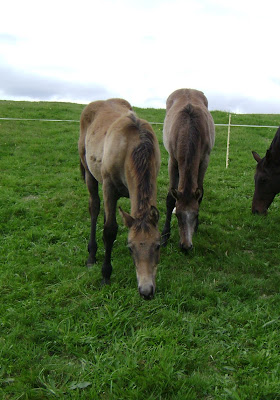 Our little T for toerag who has had a slightly quieter week than usual after the vet gelded him 10 days ago. He's now got all his bounce back and is spending his time playing with his sister.
Posted by wino at 5:34 PM No comments:

Wot we did in the weekend...

Last weekend we started by picking up our little Dexter bull Jack who has been a long time in transit but is finally here. He's a dear little lad who self loads on the float - not what you expect from a bull but I assured him that sort of behaviour would get him more girls in the long run so he should continue it. He was quite happy with his nice grassy paddock with a couple of girls next door. 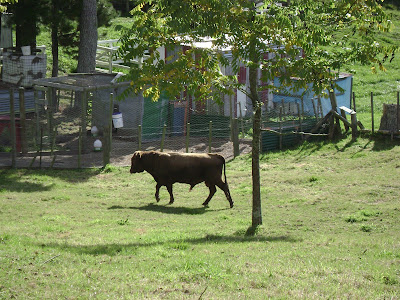 After that we went into town with some kitchen plans to get quotes on them. Find it is interesting when you first walk into a kitchen showroom six salespeople accost you. Ten minutes later when you are ready to talk about it they are ignoring you standing waiting for attention as they dial another phone number. Anyway we got that sort of underway and went and bought the appliances. Which rather upset a brand new salesperson in Noel Leemings when we explained that we were interested in having these three things and we were interested in paying X for them. Deal eventually done after he had a chat to the boss.

Not much of the day left after that.

Sunday we planted 192 trees down our fencelines. That meant saving 8 for replacements just in case. Let the new bull in with his girlfriends. He proved in short order that he doesn't have a lot of regard for electric fences and he quite likes eating eucalypts. So that accounted for the last 8 saved plants and meant more hotwire needed to be strung round.

During the week some kitchen quotes came in. It was interesting to see that some people just can't get what has been explained to them three times and other people have no problems. Prices vary very widely. We are waiting on the final one where the salesperson seemed to know exactly what we wanted and was trying to source us the right sink at the right price. So hopefully decision early next week.

This weekend hasn't been much quieter. Started on Saturday morning weaning the calves and putting their mothers in with the bull. The one remaining calf who is too young to wean got a ring on his testicles, something he protested about quite vigorously and his mother got somewhat irate that we were making her baby boy yell and backed all of her not inconsiderable weight into the crush gate with some breakage ensuing. Anyway we got that done and Jack the bull is a happy lad. More fencing was put round the new tree plantings and all animals moved onto new grass. .

Went into Te Puke for some lunch and to buy some more fencing materials. Which wasn't very successful as the farm stores didn't have the right things and the lunch was extremely mediocre.

I got Roxy out for a while for a tidy up and some general handling which she tends to need as she gets a bit feral if you don't keep at her. She managed to avoid standing on me or breaking anything so it was in general successful.

Went to bed to the cheerful sound of calves bellowing.

Woke up this morning to more calf bellowing. Picked up a heap of manure, did some more fencing, played with some foals. Currrently checking out planting options for the rest of the shelter belt.
Posted by wino at 4:05 PM No comments: