I blame the neighbour who leaned on the fence last Saturday night to say how superb all the horses were looking.

Or maybe it was my own fault gossiping with a friend on the phone of Saturday night saying what a good run we had had lately with no vets visits worth mentioning.

Sunday morning Kiwi - who had been hooning round happily on Saturday night - had a hugely swollen hind leg and couldn't walk. Dragged him down the paddock much against his will, hosed him, poulticed it and called the vet.

Vet scratched his head, suggested a broken bone or a bone chip as it had come up so fast but treated him for a lymph node infection which was also a possibility and should respond rapidly. It did respond a bit but after daily jabs in the neck which he took stoically he's still sore and swollen. It did appear though that the initial thought that it was in his hock was incorrect and it is in his stifle. So yesterday we debated all the options. Until we find out what the problem actually is any treatment is a stab in the dark. And the options are wide. If it is a bone chip it may heal without further trouble or it may need removing. If a break again he may just heal or may need pinning. Or it may be muscular (though they feel that it wouldn't have swelled so badly or so fast if it was muscular, but it could be a fairly severe injury) which would be basically rest. Along with what might need doing there is what we can afford to do at the moment and considerations as to how successful it is likely to be. If the option is to have him sound at a cost of several thousands we can't afford or unsound for the rest of his life I am not sure what the choice is. Realistically he is a pet and a hack, of no value much and although much loved because he is mine probably difficult to rehome if it became necessary. Put it on the Visa I guess. And of course if he is going to be in ongoing pain the only kind thing would be to have him put to sleep.

So this morning we took him over to the Matamata vets who are the horse experts to get an xray and to decide from there what is the best course of action. Coincidentally his first owner when he sold at the yearling sales to be someones dream racehorse was one of the vets there. Waiting for a call to see what the diagnosis is. Fingers very much crossed.

Update
No broken bones, he appears to have a blood clot in a vein at the top of his leg. Blood tests also indicate an infection so he's had his drugs changed. Poor boy also has a fairly significant heart murmur which may be normal for him or could be a result of the current infection. Cannot for the life of me remember if my vet has ever listened to his heart before - maybe not, they will check his old records if they can find them to see if anything was ever noted.

No improvement in Kiwi's leg. And the heart murmur is extremely bad. They are going to scan his heart tomorrow to see if they can see what is actually causing it, they suspect a badly damaged valve, but hold out very little hope of it improving or going away. Apparently he is in grave danger of having a heart attack at any time and his life expectancy isn't very long. Riding him is out of the question as it is too dangerous. Poor boy he's only 7. I'm very sad.

The heart scan turned out to be not as drastic as they thought, Kiwi has a bit of a valve problem but not as major as they had figured it would be so he is cleared to go back into work quietly. The leg finally responded to the variety of stuff they poured into him and went down. He's chilling out in the paddock - I'm using the weather as an excuse not to do anything with him, though truthfully I am a bit concerned about putting any pressure on the silly old sook incase I kill him. 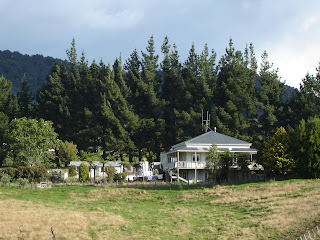 A view of our new place

This morning I went into town to do a few things and noticed these little orange sticker things on about a kilometre of our gravel road. Looked rather strange, I am not even sure how they stuck them down - would be a little difficult sticking tags to a gravel road...

Coming back there were some men digging holes in the side of the road. So I stopped and asked what they were doing. And they told me they are preparing to seal that patch of road.

This will make us a kilometre more 'civilised'

Have had such a good three days.
On Wednesday we went to Wellington to see a specialist oncologist who told me as far as he was concerned I have a chronic disease not a terminal one. So it isn't going to kill me any time soon, needs monitoring and prompt action if something goes wrong but otherwise I should carry on as normal.

The next morning (after a really solid 12 hours sleep as we had been up so early the day before) we headed over to Masterton and picked up a very special horse. 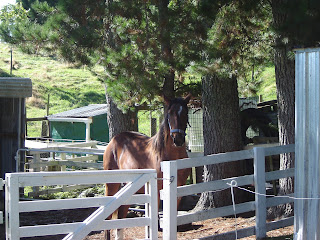 Roxey is an orphan who's mother died at her birth in December 2005. She was handreared after attempts to get her a foster mother failed by the mare's owner Lou and returned to her owner (who had leased the mare to breed from) at three months old. Her story is on Lou's blog She hasn't had much handling since. We got Gavin Morison a Wairarapa horsebreaker out to load her on the float and she got the idea very well. (I am so impressed with Gavin - a man of few words but an incredible way with horses - if I ever get a chance to do a clinic with him I'm going to) She then travelled like an angel back to Tauranga with a few stops to give her hay and water and has settled right into the front paddock - she particularly likes the yard.

Then this morning we agreed a price and shook hands on buying the neighbours property. So we are moving - two doors down the road.
We went over this afternoon to have another (more thorough) look at it. Husband is delighted to find that the garage and shed are both bigger than he thought, I have decided that the bathroom will last a little bit longer and the kitchen will also probably do for a while but the downstairs area needs work soon and our plans to put another bathroom in the basement area will be held back by the septic tank which for some unaccountable reason is at a fairly high point. I'm just pleased with the 10 acres of land, most of it flat. And the house will be gorgeous in due course.
Posted by wino at 12:58 PM 2 comments: