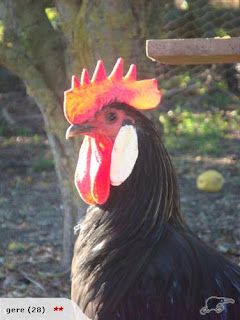 First I bought six Minorca hens on the assumption that they might lay better than the ancient old girls who were churning out two or three eggs a day, given they were
1 Bred to lay
2 Considerably more youthful than the old girls

It was okay in theory.

As the hens were a sad disappointment it was of course perfectly logical *cough* to buy a rooster (what, pay money for a rooster, the countryside is littered with them! ) so here's Rudi, purebred Minorca and I had to bid a little bit to see off the opposition on Trademe.

He was quite impressed with his new wives and looked happy enough in his house.

Except at 5am he started crowing, and it sounded very loud! It was - given he had flown the coop and was under our bedroom window.

He didn't think going home was a good plan either - little bathplug.

Eventually one rooster got caught and had a wing clipped. He's been a little better behaved since and doesn't start crowing until 6.30am which is a little more civilised.
Posted by wino at 5:56 PM